Archive for the ‘Ruby’s Bar’ Category

Is fashion and partying your kinda thing? Say no more. On Wednesday September 21st, we hosted an incredible Boiler Room event in collaboration with Zalando. VIP guests were invited into our MC Motors location to see the launch of the popular brand which originated in Berlin. The setup was stunning with technologically advanced dresses displayed in a polaroidesque style against the industrial brick. The glass fibres of one of the dresses made for such gorgeous and unique flash photography, that it projected magnificently again the harsh background. 150 of the lucky first arrivals were greeted with the opportunity to get a free pair of specially designed, Adidas trainers from artists right there and then.

Down in our Blue Factory, the Boiler Room club scene was taking place. Ruby’s Dalston supplied the bar while Dj’s such as Black Foot Phoenix, Kitty Cash and Bradley Zero kept the crowd pumping throughout the night. To finish everything off, Jamie Woon played a wonderful, upbeat and soulful set. A fantastic night with some incredible people and we were thrilled to be apart of it! Ruby’s Bar and Lounge is the perfect location to come and relax for a few drinks with friends after a days work. Last night, they hosted an amazing Jazz night! The live band filled the room with a refreshing and entertaining performance, with a delightful atmosphere radiating throughout! Ok ok, so by now if you want a place to watch the Games, you have options. If you weren’t lucky enough to get the tickets you wanted (neither were we), you could always trot along to a park and watch it with thousands of others or, failing that, just watch it on your own telly. It’s true. But what if there was something a bit different..

From the people at Dalston’s premium underground drinking den Ruby’s comes Chariots of Fire – the Olympic screening event you might just have been waiting for… Over the weekend of Saturday 4th and Sunday 5th August, Ruby’s decamp to the Castle Gibson-owned MC Motors next door – a charming backstreet warehouse space decked out with oversized chesterfield sofas, theatre lights and retro stylings to boot.

Causing a stir in certain corners for their selection of local and world beers plus game-changing concoctions like the ‘Blackberry Mojito’ and the ‘Chili Apple Martini’, Ruby’s move to their bigger neighbours’ for a two-day residency, featuring all the action from the weekend’s games – including the 100m final – live on the big screen, hand-picked selection by DJ Miles Hartley and food by local guerilla gastronomes Hidden Dining. There’ll also be some topical additions to the ever-evolving menu including the ‘Going for Gold (Tequila) and Watermelon’.

At the forefront of East London’s burgeoning dining scene and under various guises Hidden Dining founder Claire Roberson has been providing relaxed informal dining in thought-provoking East London spaces and locations for the past five years. For Chariots of Fire, they’ll be setting up a 40-seater restaurant for the weekend, offering guests either home-made bar snacks or some sit-down traditional British Cuisine.

Plus, the rustic MC Motors has played host to numerous Olympic photo shoots over the past few months, a selection will be on show over the weekend including current stars Jessica Ennis and Phillips Idowu as well as former greats Linford Christie and Kriss Akabusi.

RSVP to rubys@castlegibson.com or attend the facebook event to confirm entry. Join us for an afternoon filled with delcious cakes, scones, sandwiches and bubbly to celebrate all that mums do!

Nothing says Happy Mothers Day more than treating your mum to an indulgent afternoon tea with a twist, set in the decadent surroundings of Ruby’s in Dalston.

A selection of classic sandwiches, Savoury tarlets, Scones with clotted cream and homemade jam, mini cupcakes, lemon drizzle cake, dark chocolate brownies, iced and spiced biscuits, a glass of Prosecco and of course a pot of tea all for £24.50 per person.

During the afternoon Ruby’s bar will also be offering a full list of delectable cocktails and the finest wines and spirits.

Please email us at rubys@castlegibson.com to reserve your table now as spaces are limited.

Set underneath the cinema sign at 76 Stoke Newington Road Ruby’s is an intimate subterranean drinking den serving expertly mixed cocktails and quality alternatives in a unique and atmospheric setting. Set up by Tom Gibson in the former kitchen of Ruby House 3, a Chinese takeaway, the room was stripped back and adorned with a Mayfair bar and some delicate interior alterations. Drinks are made using top quality ingredients with all alcohol being premium and all juices and syrups freshly made on site. We place great emphasis on the small touches that make a difference so all our Blackberry Mojito’s are served in 1940’s milk bottles, all our beer mats are vintage and unique and service will always be performed with a smile. Ruby’s aims to fuse the atmosphere of an old fashioned bar with modern day standards of quality and service.

We have a small carefully crafted cocktail menu which include 7 Ruby’s classics and 7 seasonal ones plus a selection of alternatives including Redchurch Ale, Brooklyn lager, Breton cider, fine wines plus a whole array of others.

In regards to bookings please note that we can only take bookings up until 8pm and (on a Friday/Saturday night) for a maximum of 8 people.

Metro “The Savoy or The Ritz it’s certainly not but Ruby’s is a class act in it’s own lovely lo-fi way.”

Evening Standard/Barchick “The sign says ‘Nothing to See Here”. Not true, there is plenty.”

Time Out “Our new fave hidden Dalston spot, just don’t tell everyone about it!”

Vogue Espana “Few things are closer to the definition of cool.”

View London “Ruby’s is definitely a venue to prove the cynics wrong, possessing the genuine feel of a hidden gem, rather than a try-hard hipster concept bar.” 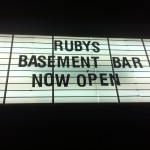 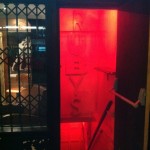 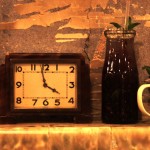 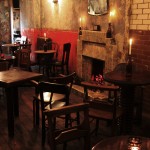 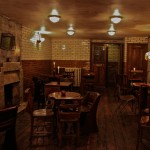 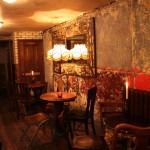 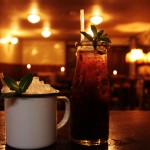 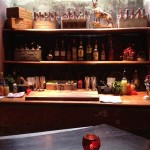 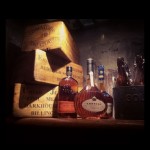 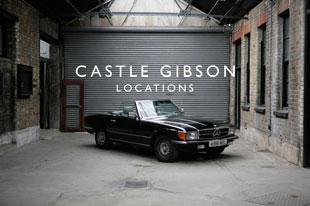 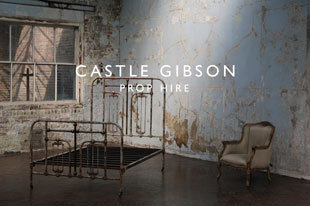